I am interested in words that have multiple meanings, multiple ways of being interpreted. I like to use a word that can be both a verb and a noun. Baffle means to bewilder or perplex, but it’s also a restraint to block noise. 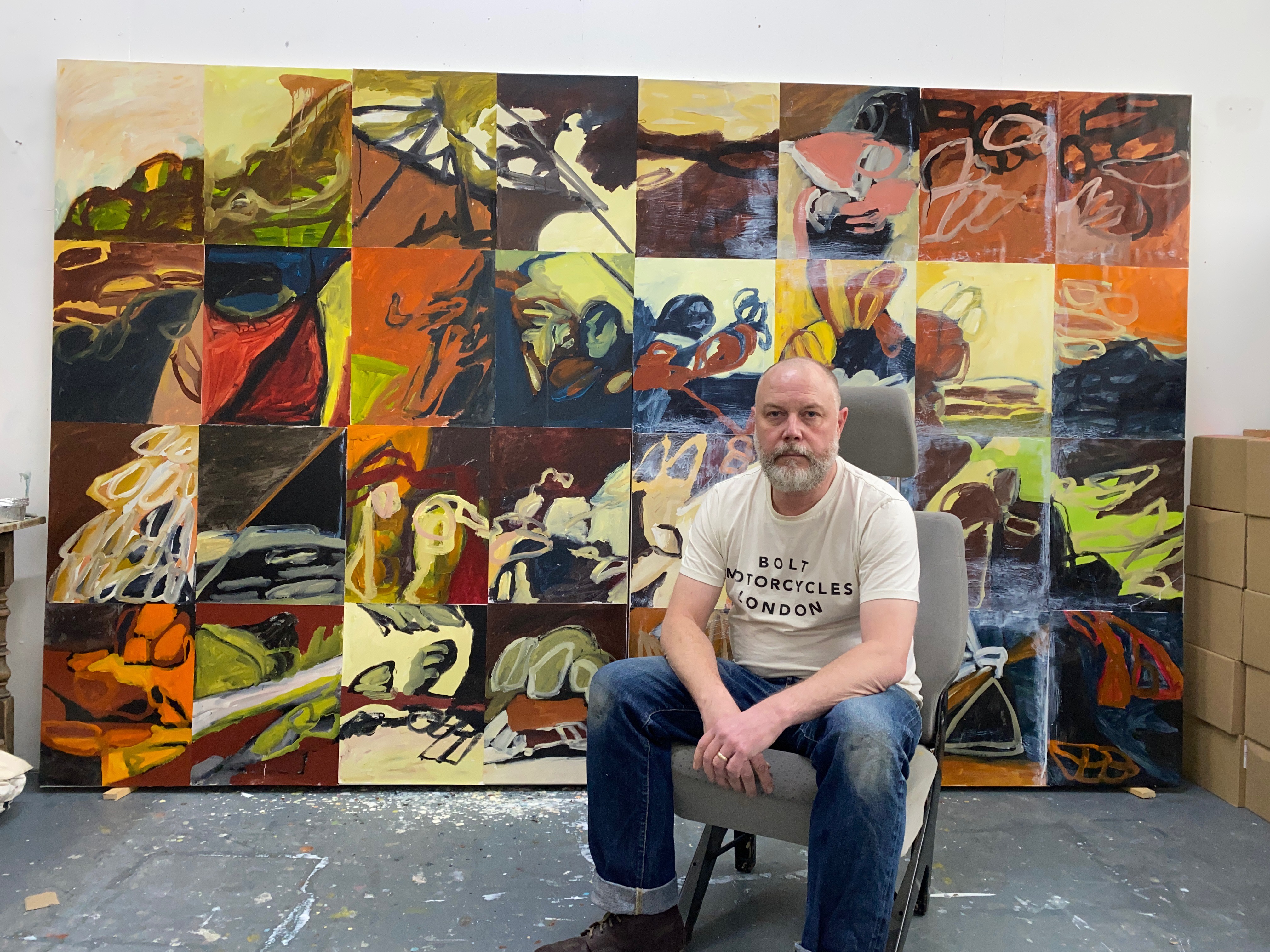 Anyone who attempts to paint themselves into, and then out of, a space of unknowing needs to start somewhere. When Henry Ward first experimented with collage, whilst a student at Winchester School of Art, he realised how by bringing different elements, images, and physical associations together, he was able to overrule, or at least put off the dominant gesture. Aware that work does not really stop, rest, or settle while what amounts to a particular form of holistic exercise persists, Ward’s paintings have become an amalgam of many apparent contradictions. At one point, for instance, he made objects out of existing stuff by wrapped masses, wedging and tipping material like strata till it became somehow real, in order to paint. Working non-stop, image and process for Ward has become one and the same thing, and yet the same state of mind, perhaps that of the person looking, is still able to make a pictorial sense out of it all, to at least accept what is being handed out.

For Ward it is something like going for a run; always difficult at the first, but essential to push past and conquer awkward and bad habits, to allow a more automatic, less conscious, mental and physical state to eventually emerge. He starts, as a painter, once again each time, as it were, working around the apparent limitations of the familiar within a knowledge of mark and gesture, whilst seeking the surprise of the unknown. He is an artist who must reach, from nothing, once again, with enough physical ease to flow each time out into an amazing limbo in which neither loss nor endeavour are heavily mourned or celebrated. It remains difficult, however, for any painter to fight their own rules and inclinations.

With the end of individual editing or the action of putting elements together inthe role of the work, therefore, how do we see this associative sense with the bringing together such a free flowing, range of hasty associations? While one work might veer between interior architectural space, another towards constructed landscape, and another seemingly close-up to the surface of still life, the person looking needs to mimic the role of artist as informer, disclaimer, interceptor and even someone who has bolted away from any particular direction, in order to take part. Ward’s transition over the last year between one studio, and another, between proper space, perhaps for looking, and limited space for working has produced another kind of space altogether. And yet when it does, somehow, reach what we think we strive for and desire, it is amazing how logic is allowed to shine through pretty much any apparently arbitrary relationship.

With light against dark, the paint seems fresh but as an amalgam of movement, skin and built up, from closer in, towards the face of an unknown and pretty unimportant object, the structures, brought against each other, settle into uniformity like the net structure holding the surface back, and the colour emerges as a result of time spent working backwards and forwards against it. Joining up squares to make a Medusa by Géricault; from working in the shed on 32 works on paper, to breaking the gridding that MEDUSA is a composite of works, which work to scale, the artist sets up a collective love for the figures that assemble and disassemble an x-ray of memory. Some, like the Medusa, play and rely on exactly that already existent shadow of composition. All the paintings, whether collaged together or painted with contrary and contrasting approach, by collaging layers, rather than sections, do always carry, none the less, a bottom, a top, as well as a degree of illusion. The work, never purely phenomenological, leads itself to different weights, with a resultant a sway in significance between that in any painting by Courbet, for instance, and the apparently insignificant occurrence at the back of one by Gaugin.

To baffle is to quieten something that already exists, an action you imagine, that calms all down, to hide, somewhat, almost camouflaged in its own context, to allow something else. Ward baffles by painting back tonally to find a ‘found’ logic, in the hope that the initial ‘sound’ has been squashed in favour of something perhaps more visual and less strikingly anecdotal. Pinnacles, with pieces piled on top, show drawing as paint and the other way around. This mash up of artistic intention, betrays an artist who backs away from being directed towards the particular and yet who looks back in the hope of finding a metaphorical place in painting which can provide a warm sense of homecoming for meaning.

Sacha Craddock is an art critic, writer, mentor and curator based in London. She is co-founder of Artschool Palestine, co-founder of the Contemporary Art Award at the British School at Rome   and Abbey Council member, Trustee of the Shelagh Cluett Trust,  Joint President of the International Association of Art Critics AICA UK.[1]

and co-founder of the SPECTRUM Art Award, Sacha has been Chair of the Board of New Contemporaries and  selection process since 1996.